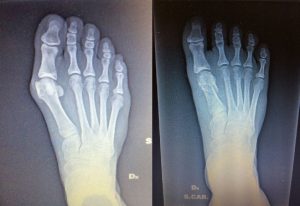 Doctors have been surgically removing bunions for centuries. Bunions are common and the National Center for Biotechnology Information (NCBI) estimates between 23%-35% of people have them.

A bunion can be painful. Usually, symptoms occur on the side of the foot, the sole, or the big toe. In 1981, Dr. Basil Helal counted over 150 different procedures to treat bunions.

In the past, people had two options: surgery or non-invasive treatments like wraps and splints. That’s until minimally invasive surgery (MIS) came along.

Bunions have always been an issue and in 1836, Dr. Gernet was the first to remove them. He shaved the the bone to get the foot to heal. It was not successful.

As time went on, bunion issues continued and doctors tried to invent new treatments. In 1881, Dr. Reverdin had the first successful procedure for treating bunions. It was a way of removing a piece from the joint to ease the bunion. The procedure is called the Hohmann osteotomy, and it was the first foot surgery with multiple successes.

Still, it wasn’t fool proof. Doctors believed there had to be a better way of treating bunions. In the 1940s, with the development of new technology, minimally invasive foot surgery became a reality.

Throughout the 1960s, technology and equipment for MIS was invented and improved. Technology then made a breakthrough, with a machine that allowed surgeons to view a continuous image of what they were doing inside the foot, without exposing the surgery site. In the 1990’s, innovation began to flourish. With the latest technology at hand, different minimally invasive foot procedures began to spring up all over the country.

As the science developed, so did the different methods of application. In 1990, Dr. Bosch and his team developed the SubCapital Osteotomy Techniques procedure. It involved using MIS to remove parts of the bone and stabilize the toe with wire. This procedure allowed full weight on the foot, with protective gear. The doctor and his team planned a 7 and 10-year follow-up for their patients to assess the success of the operation. Fast forward to the year 2000.

Dr. Bosch and his team discovered that out of 114 feet, 81% of patients were satisfied, with 95% reporting no pain. There was also a significant reduction in radiographic measurements. They deemed the procedure a great success.

By the year 2005, other doctors began to follow suit. Dr. Magnan and his colleagues applied Bosch’s method to 188 patients with a two-year follow-up. They saw a significant correction in pre and post-op parameters. In that study, 91% of patients reported satisfaction.

Other doctors began doing more and more MIS. Dr. Giannini and his colleagues developed a procedure called the Modification SERI (Simple, Effective, Rapid, Inexpensive). They made minor modifications to Bosch’s method and reported a 92% fair to excellent satisfaction rate in 54 of their patients.

The SERI method using minimal hardware and can is extremely effective and maintaining correction. With the SERI bunion, a small wire is used to maintain correction. Dr. Haynes typically does this method with more severe bunions that are corrected using a minimally invasive technique. A simple google search will pull up similar images to those below.

For smaller bunions Dr. Haynes uses no hardware and relies on the bandaging and splinting to maintain correction. A great example of what can be accomplished with minimally invasive bunion is seen below. This example was performed by a colleague of Dr. Haynes, Dr. Nguyen of FeetNBeyond of NJ. Dr. Nguyen corrected this foot without any metal or hardware. 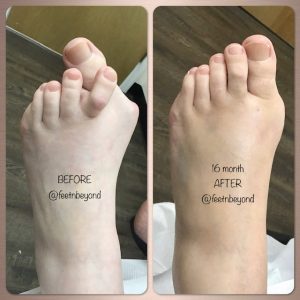 Today, minimally invasive foot surgery is one of the easiest and least stressful bunion-removal procedures available. Doctors have finally created a means to not only improve a patient’s quality of life but do so in the least invasive way possible.

We will do our best to accommodate your busy schedule. Request an appointment today!

Font Resize
Contrast
Accessibility by WAH
Call Us Text Us