Traditional bunion surgery has dated back to the early 1800’s with procedures like a silver which is no more than shaving the bump and tightening up the joint capsule. This is no longer done as it isn’t effective, and the bunion just comes back. Then there was the McBride which incorporated the Silver but with a tendon release. Again, in and of itself it was not effective and bunion came back. Then came all kinds of bunion surgeries and techniques. Most of these incorporated the McBride with some sort of bone cut designed to shift the bone over. The most common ones are the Austin, Scarf, closing base wedge osteotomy, opening base wedge osteotomy, and Lapidus.

To determine which of the procedures worked best for you, x-rays were taken and depending on certain factors and angles measured on those xrays, a surgical plan was decided on. One of the most common angles used from xrays is what we call the IM angle. This angle measures a straight line down the bunion and a straight line down the second toe as seen here. 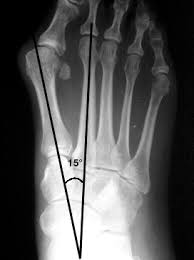 A normal IM angle measures 0-8 degrees. With a mild bunion the IM angle measures anywhere from 9-12 degrees. A moderate bunion measures 13-15 degrees and anything over 16 degrees is considered severe. An Austin is mostly used for mild bunion deformities. It includes the McBride with a cut in the bone and the head of the bone is shifted more towards the 2nd toe and the bone is fixed with screws. An example of that cut is noted below:

The Austin works great for mild bunions but there is still a risk of recurrence. The Austin is still performed today and is the most common bunion procedure performed. Patient that have this done can typically walk from day one with very little to no pain and healing takes about six weeks.

For your moderate deformities, the cut in the bone must be more proximal in the bone. This means it needs to be done closer the back of the foot. This allows a longer lever arm to allow for more shift and better correction of the bunion. This is where procedures such as the Scarf, closing base wedge and opening base wedge take place. While these procedures are still commonly done they are becoming less and less common.

A severe bunion is a whole different problem. Some of these are so bad patient has extreme pain. To correct a severe bunion you really have to perform what is called a Lapidus. A Lapidus is a procedure that is done at what we call the 1st tarsometatarsal joint. 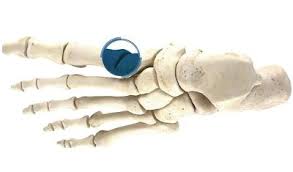 As you can see this joint is angulated. This is actually the source of unstability that causes the bunion. In severe bunions this joint must be addressed to properly correct the bunion. With the Lapidus the cartilage is removed from the joint and the joint is fused with the correct alignment and the bunion is corrected. 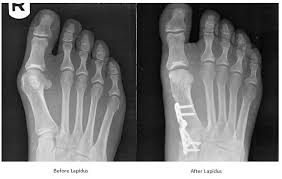 A Lapidus procedure is a little more intense and there is more pain involved and usually some time is required for you to be off your feet in order to allow proper healing. This is a very good procedure and can actually eliminate any recurrence of the bunion.

Here at Bunion Centers of Oregon we still do Austin bunionectomies and Lapidus bunionectomies. However, we are doing less and less because we feel there are more effective procedures out there that do a better job of correcting the bunion with less pain and more success. See Lapiplasty and minimally invasive bunionectomies under the bunion tab.

We will do our best to accommodate your busy schedule. Request an appointment today!

Font Resize
Contrast
Accessibility by WAH
Call Us Text Us